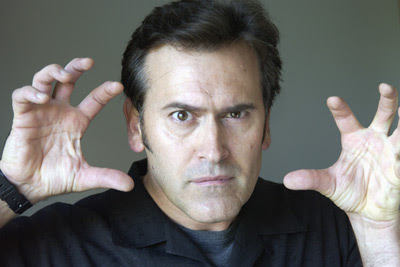 Bruce Campbell, was born on this day, June 22, 1958. Of course many of you know who Bruce is, thanks to his many wonderful and mostly humorous roles in horror and mainstream films. Bruce got his first film break starring in Sam Raimi's now classic EVIL DEAD. Bruce went on, not only to make 2 sequels to Evil Dead (Evil Dead 2 and Army Of Darkness), but Bruce went on to become one of the most recognized and lovable character actors in horror films. With roles in such movies as Bubb-Ho-Tep, Maniac Cop, The Man With The Screaming Brain, and the self-deprecating My Name Is Bruce, he has proven that not only can he pull off horror, but he can pull it off with tongue planted firmly in cheek, and with a physical humor that is unmatched. Many of you also know Bruce from his stints on television, on such shows as Hercules, Xena, and his own starring show The Adventures Of Brisco County, Jr. Recently, Bruce has been starring on TV's Burn Notice, where I had the pleasure of meeting Bruce on the set of the show. Bruce, may you continue having a successful career, and may you have a very Happy Birthday! Hail to the king baby!!

Posted by George Van Orsdel at 8:35 AM