Hammer horror actress Ingrid Pitt, best known for starring in cult classics such as Countess Dracula, has died at the age of 73.The Polish-born star died at a hospital in south London after collapsing a few days ago. She was regarded by many fans as the queen of Hammer horror films.

The star's death comes weeks after film-maker Roy Ward Baker, who directed Pitt in The Vampire Lovers, died at the age of 93. Pitt's daughter Stephanie Blake told the BBC News website that her mother's death had come as a "huge surprise". After the actress collapsed recently, doctors had told her was she suffering from heart failure.
"She could be incredibly generous, loving, and she'll be sorely missed," Mrs Blake said. She added that she wanted her mother to be remembered as the Countess Dracula with the "wonderful teeth and the wonderful bosom".
The Wicker Man director Robin Hardy said he had "very good memories" of the actress. "She was a very attractive person in every sense. She was a perfectly good actress but a very decent person as well, not that those two things don't often go together. I'm very sorry to hear she's gone," he added.
Official Hammer historian Marcus Hearn paid tribute to the star, calling her a "talented actress and fine writer. All fans of Hammer and of British horror are going to miss her terribly." He added: "She was partly responsible for ushering in a bold and brazen era of sexually explicit horror films in the 1970s, but that should not denigrate her abilities as an actress." A good friend of the actress, Mr Hearn said she was "gloriously uninhibited" and "great fun to be with".
Although she was not the first female star of a Hammer film, Mr Hearn said she had always been "very proud" of becoming the first prominent female protagonist in a Hammer after her role in The Vampire Lovers. "All fans of Hammer and of British horror are going to miss her terribly," he said.
She began her career with fairly minor roles in several Spanish films in the mid-1960s. But in 1968 she landed a supporting role in war movie Where Eagles Dare, appearing alongside Clint Eastwood and Richard Burton.
The actress got her breakthrough role two years later in the horror thriller The Vampire Lovers, which was a box office success. Several Hammer movies followed, firmly establishing her as one of the key women of British horror of the 1970s. Her other film credits included The Wicker Man (1973), Who Dares Wins (1982), Smiley's People (1982) and Wild Geese II (1985). Pitt made regular appearances at horror conventions and penned several books about her career in the genre. Her talent will be sorely missed. Rest in peace Ingrid.

Posted by George Van Orsdel at 2:03 PM No comments: 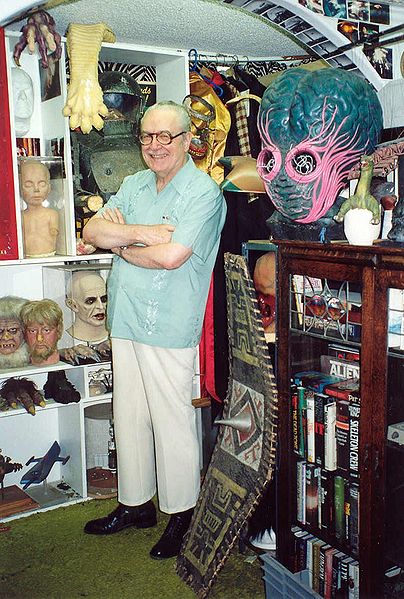 When I was a little boy, I remember going to the newsstand with my dad. There, among the typical magazines was tucked away a magazine, whose cover I could barely see, but I plucked it off the newsstand, and lo and behold my life would change forever, it was Famous Monsters of Filmland magazine, the creation of the ultimate fanboy, Forrest J. Ackerman! Forrest J. Ackerman, also known as Mr. Science Fiction, 4SJ, Uncle Forry, Dr. Ackula, the Ackermonster, among many others, was born November 24th, 1916, and went on to create possibly the most influential and often copied monster magazine the world has even known. I was the ultimate Famous Monsters of Filmland magazine fan (still owning a nice collection of back issues), and in turn becoming a fan of Uncle Forry himself. I eventually grew to admire Forrest for his passion for monster and sci-fi movies. In fact, Forrest is actually credited as coining the phrase "sci-fi". Forrest J. Ackerman and Famous Monsters of Filmland magazine went on to be one of the single most influential sources to many a filmmaker, including, but not limited to, Steven Spielberg, George Lucas, John Landis, Rick Baker, among many others. Forrest sadly passed away last December 8th, but he will forever live in the hearts of monster movie fans. Read all about Forrest's life on his Wikipedia page. Happy Birthday Forrest, you will forever be loved and missed!
Posted by George Van Orsdel at 9:16 AM No comments: Born William Henry Pratt, on November 23rd, 1887, Boris Karloff went on to become the most famous and recognized actors in the horror genre, earning the title "King of Monsters". Although he has performed in over 80 films before starring in the movie that made him a star, Frankenstein (1931), Boris Karloff went on to become a massive success, not only in films, but radio, stage and eventually on television. Boris went on to play such fantastic characters as the Frankenstein monster, The Mummy, Dr. Jekyll and Mr. Hyde, and many many more. I credit Boris Karloff on a personal level as being the reason I got into horror to begin with. As a small child I watched Frankenstein and it forever changed me into the horror fanatic I am today (check out my Boris tattoo in the picture below!). Boris had a magnificent career, which has had a lasting influence on many actors and filmmakers. To read more about Boris' incredible life and career, check out his Wikipedia page. Happy Birthday Boris!!

Posted by George Van Orsdel at 11:42 AM No comments: Born William Claude Rains on November 10th, 1889, we first saw (or should I say didn't see) Claude in his first starring role as The Invisible Man, directed by James Whale. Claude started his acting career on the London stage, but soon made the transition to film. After The Invisible Man, Claude started building up quite a hefty resumé of film, starring in such classics as The Adventures of Robin Hood, with Errol Flynn, Casablanca, co-starring Humphrey Bogart, and in Alfred Hitchcock's Notorious. Claude also established himself in the horror genre, starting of course with The Invisible Man, then starring as another classic monster, The Phantom Of The Opera. We also know Claude as Larry Talbot's concerned father in Universal Studio's classic The Wolf Man. Read more about Claude's amazing career on his Wikipedia page.
Happy Birthday Claude!
Posted by George Van Orsdel at 10:51 AM No comments:


Hell-o there boils and ghouls!

Welcome to the 30th installment of

I hope you all had a very Happy Halloween, full of frights and fun! We're wrapping things up for
the Fall season, so you better start preparing for the dead of Winter!


This month's morbidly musical morsels are: