Spooky Empire wanted to get the party started early in 2011. So they have put together one hell of a second show, coming in May of 2011. They are ready to rock the doors off the Wyndham Orlando Resort with sickest guest lineup on the convention scene so far! This event, appropriately called Spooky Empire's MAY-HEM, makes its home at the Wyndham Orlando Resort on May 27-29, 2011. Spooky Empire is fast becoming one of the most popular horror event companies in the U.S. with fans coming from all over the world to attend. Last year's October show was monstrous, with the most fans in attendance so far. So make your Memorial Day weekend plans now and come on out!

Their amazing guest line up includes a 30th Anniversary Reunion of The Evil Dead! Including horror icon BRUCE CAMPBELL, best known for his roles in "The Evil Dead" films, Army of Darkness, Xena, Bubba Ho-Tep, My Name is Bruce, and his newest project, Burn Notice, the #1 rated series on cable. Bruce will be joined by The Ladies of the Evil Dead; Betsy Baker, Ellen Sandweiss, and Sarah York, as well as Ted Raimi, Hal Delrich, and Special FX artist Tom Sullivan. From the Army of Darkness film, Timothy Quill will be appearing and from Evil Dead II, Danny Hicks.

That's not the only cast lineup at May-Hem. For all of you Boondock Saints fans, come out and meet the stars, Sean Patrick Flanery, Norman Reedus and David Della Rocco. Sean Patrick Flanery is known for many other films and television projects including Powder, The Young Indiana Jones, The Dead Zone and Saw 3D. Norman Reedus is most currently starring in the AMC series, The Walking Dead.

Added to this already incredible lineup is Alex Winter best known for his part in The Lost Boys and even better as "Bill S. Preston, Esq." in Bill and Ted's Excellent Adventure. Cult Fiction icon Bob Wall from legendary Bruce Lee films including "Enter the Dragon" will be making a rare convention appearance as well as the beautiful Diora Baird, one of Maxim's Hot 100 of 2007 and 2008. She has starred in films such as The Texas Chainsaw Massacre: The Beginning and Night of the Demons. Michael Kenworthy "Jesse Wilson" in Return of the Living Dead:II" will be in attendance as well as Erin Grey of Buck Rogers fame, as well as Jason Goes to Hell and of course Silver Spoons.

Last but certainly not least, the most recent and most exciting addition to May-Hem, ANTHONY MICHAEL HALL! His long list of unforgettable projects spans 3 decades! Including The Breakfast Club, Sixteen Candles, Weird Science, Johnny Be Good, National Lampoons Vacation, Edward Scissorhands, the television series The Dead Zone, and the list goes on. Don't miss out on this opportunity to meet him!

How can there be a Spooky Empire event without the life of the party, Bill Hinzman, the original Zombie. Bill will be hosting the Friday night kickoff event, The Dead Man's Party, by the pool. Some of the events taking place Friday night will be bands, DJ's, and a most original Zombie Costume Contest with $500 in cash prizes! The weekend will also be packed full of panels and Q&A's hosted by the many Celebrity Guests in attendance.

Advance tickets for this ultimate event are available now! $50 gets you in for the whole weekend, that's all three days of May-Hem! One day passes are just $30 and $35. VIP packages for $199 are still available but going fast. Visit the website www.spookyempire.com.

The Wyndham has extended an amazing rate of $59 a night to attendees if you mention "Spooky Empire" when you call for reservations. Make sure you reserve your rooms early, at this great rate they won't last! The Wyndham reservation line is 1-800-421-8001.

Join the legions of Spooky Empire fans on their Forum at www.spookyempire.com. Meet other fans, get answers to your questions, and find out the most recent updates on the show. You can also find and keep up with Spooky Empire on social networking sites such as Facebook, MySpace, and Twitter.

For more information visit the website at www.spookyempire.com.
Posted by George Van Orsdel at 7:36 AM 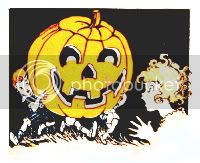