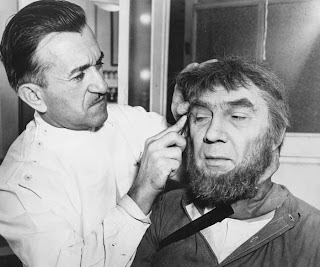 Jack Pierce was born May 5, 1889, and Jack is most famous for his design and creation of the make-up for Universal Studio's Frankenstein, in 1931, starring Boris Karloff. But Jack created many of the famous Universal monster make-ups we're familiar with today, for such films as The Man Who Laughs, The Mummy, starring Boris Karloff, Dracula, starring Bela Lugosi, The Bride of Frankenstein, and The Wolfman, starring Lon Chaney Jr., as well as many others. Jack Pierce left a legacy behind for many fans of classic monster movies, and inspired a slew of fans to become make-up men themselves, such as Rick Baker and Tom Savini.
Happy Birthday to the original Monster Maker!!
Posted by George Van Orsdel at 4:00 AM