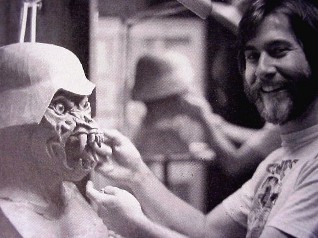 I would like to wish a very Happy Birthday to Academy Award winning make-up artist extraordinaire Rick Baker, born December 8, 1950. Inspired by legendary Hollywood make-up artist Jack Pierce, Rick's first major professional make-up work was assisting the famous Dick Smith with the make-up work on The Exorcist. From there, Rick quickly established himself as one of the best horror and special effects make-up artists in the film industry. In 1981, Rick received an Academy Award for his work on An American Werewolf In London, the first ever Award given in this category. In fact, the category for Best Make-up Effects was actually created because of Rick's work on An American Werewolf In London. Read all about Rick's amazing career on his Wikipedia page. Happy Birthday to one of Hollywood's greatest monster makers, Rick Baker!
Posted by George Van Orsdel at 1:00 AM