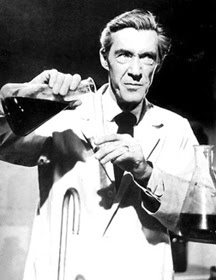 John Carradine was born on February 5th, 1906, and went on to become one of Hollywood's greatest character actors, not only in the horror genre, but many of Hollywood's mainstream films and television shows. John was also the father of famous actors David Carradine, Keith Carradine and Robert Carradine, all who have also had very successful careers in film. John amassed a total of over 230 film appearances, playing everything from mad scientists, henchmen, cowboys, and even Count Dracula himself! John can be seen in such classic films as The Bride Of Frankenstein, The Grapes Of Wrath, House Of Frankenstein, The Astro-Zombies, and one of my favorite John Carradine appearances in The Howling. To read all about John's long and substantial career, check out his Wikipedia page. Happy Birthday John!
Posted by George Van Orsdel at 2:29 PM